Congratulations to Mary Carpenter for being named Broadview Multi-Care Center’s Resident Star of the Month for March 2021! 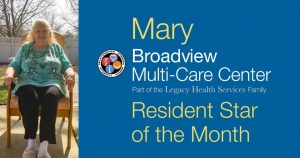 Born to Arwilda and Walter, Mary was raised in a small town known as Larue, Ohio. She was the sixth child of her parents, with four brothers and a sister; Walt, John, Arwilda, Norm, and Lowell. Her parents worked at a place named the Jones where they would clean and pack up meats to be shipped out. In 1954, Mary met her husband when she and a friend were taking a stroll and stopped on a bridge to look out at the water. Soon after, Kenneth and a friend came up to Mary and introduced himself to them. From that moment on, Mary and Kenneth were inseparable. They soon married the following year on July 3rd, 1955, and continued to live in Larue where they started a family.

In 1956, Kenneth Jr. became their firstborn child. Then, in 1957, they had their second son Mark, and in 1958, they welcomed their third son, Randy. Soon after, Mary and Kenneth were blessed with their first daughter Kelly in 1962 and their second daughter and final child Missy (Melissa). Mary worked as a waitress for 26 years and loved her job. She worked at a diner in Larue called the Coonies. After their kids were all grown up, Mary and Kenneth moved to Manassas, Virginia. Once her husband fell ill, they moved to Cleveland where they could be closer to University Hospitals. Mary and Ken were together for 53 incredible years, and Mary has 13 grandchildren and six great-grandchildren.

In her free time, Mary enjoys bingo, coloring, spending time on the computer, gardening, and cooking. Mary’s favorite meal includes her homemade spaghetti sauce, where she would use the vegetables from her own garden. She also enjoys baking a cake called the “Whacky Cake,” which is a homemade chocolate cake made from scratch. She loves the color lavender and loves roses, but her favorite rose is the American Beauty. Mary said this flower reminds her of her father, as he was always growing roses, and that “He always had a green thumb.” Mary has been a part of our Broadview Multi-Care Center family for five years.